We’ve been shortlisted for an entrepreneurial business award!

We are absolutely delighted to receive further news that Founder of Support Star, Susan Maloney, has been shortlisted for the “Female Entrepreneur of the Year” award at the Thames Valley Business & Community Awards: http://www.thamesvalleyawards.co.uk/shortlisted-nominees/

Winners are announced at the awards ceremony on 30th January 2020 in Reading. 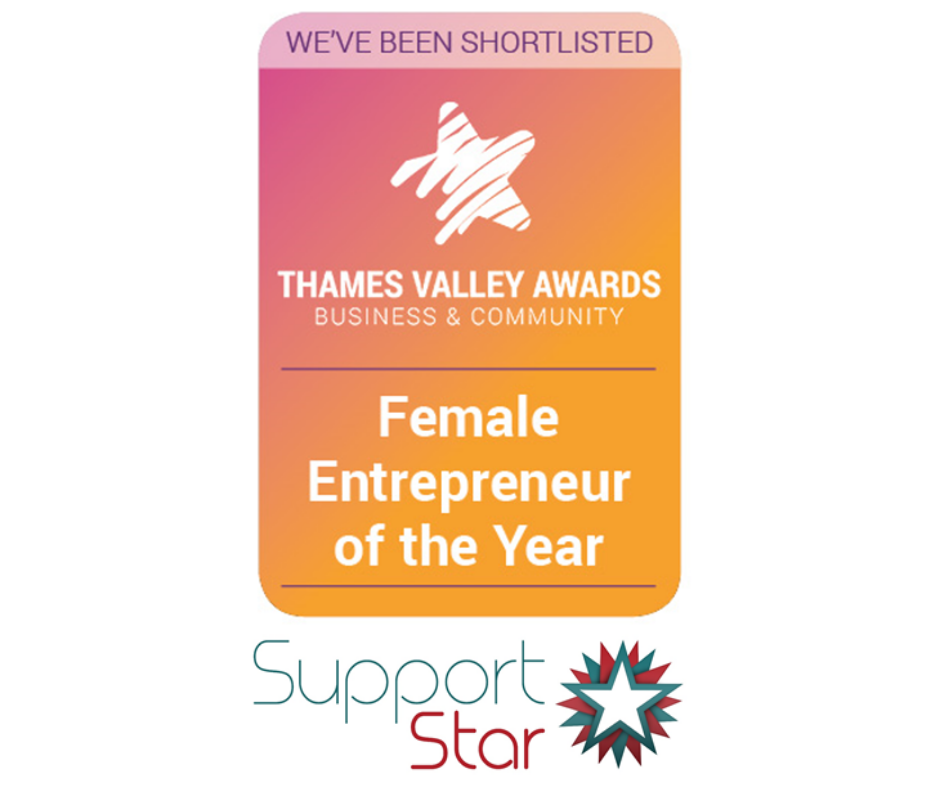 The awards scheme, organised by Great British Expos, recognises the region’s most ambitious, inspirational and exciting businesses, charities and individuals.

A record number of entries meant it was the toughest year to create its shortlist, however the shortlisted nominees have been released and can be seen via the following link: http://www.thamesvalleyawards.co.uk/shortlisted-nominees/

Among the current shortlisted nominations are entrepreneurs who had innovated unique solutions to the problems they faced, put their heart and soul into making their industry better, overcome personal and professional hardship to triumph in business, and more.

This year, the standard of entrants is already very high that we are might exceed last year’s shortlisted record of 163 for the awards across the award categories. While we cannot give all nominees an award, each winner is truly deserving of recognition for their achievements.

The Thames Valley Business and Community Awards judging process will see a range of esteemed entrepreneurs come together to scrutinise and select our finalists from the short-listed nominees and choose the winners among them.

Jackie Chappell (Renowned Thames Valley Entrepreneur & 1st Woman CEO of British Rail) is again part of the judging panel and said: “Judging this year’s awards will be tough. Every entry is of a very high standard and each one is unique which makes the decision harder. I’m very proud of the quality of businesses that we have in this region and these awards give them the true recognition that they deserve.”

Alec Jones-Hall, Director of Thames Valley Business and Community Award’s said “We are proud and excited to be celebrating outstanding achievement across the region and rewarding those who are making a huge impact throughout the Thames Valley.”

The winners from the 14 categories will be announced at the award ceremony in The Hilton, Reading, on Thursday January 30th with one being hailed The Business of the Year. The stars of the ceremony will undoubtedly be the Awards winners.

The award hostess is Mary Flavelle is based within the Thames Valley and is renowned for helping SME’s of all shapes and sizes. She is incredibly passionate about helping women in Business and which why she launched the UK’s biggest female national network with over 11,000 members.

Mary Flavelle is commonly known throughout the UK as the ‘Queen of Networks’. It is often said that who Mary doesn’t know isn’t worth knowing! The following are just some of the roles she has held: Ambassador for Women,
Chairman of the East Berkshire branch of Federation of Small Businesses, Head Judge for the Young Enterprise scheme and Judge at Lloyds TSB Enterprise Awards for London and South East.

Throughout her lengthy career, Mary has had various radio and TV appearances. Mary is regularly featured in on BBC Breakfast, Channel 4, BBC Radio Berkshire and Marlow FM.

Our headline entertainer will be Tiny Tina Turner and her six piece band will provide the entertainment. She has worked on some big shows, and with some of the biggest names. Tiny Tina Turner is one of Europe’s best Tina Turner impersonators. She has the voice and the mannerisms which really do reproduce the stage charisma of Tina. Nominees can expect to be entertained by Miri and her high energy six piece band playing all the popular Tina Turner songs, as well as a few other favourites along the way! Capture the simply the best moment as Miri and her band delivers a pulsating show, emulating the sounds of the greatest ever female Rock.

More entertainment will be provided by Sparky & Sprite as they cover acts like Abba & Elvis.  Mark ‘Sparky’ Harding and Anne ‘Sprite’ Jeffery are an experienced duo who sing songs from the 1940’s, 50’s & 60’s along with plenty of modern tunes.

Our keynote dinner speaker is One of Britain’s most famous athletes, Naomi Riches MBE.  Born in 1983, Naomi Riches was just 8 weeks old when she was diagnosed with a visual impairment.  Her parents knew immediately that this would throw up many challenges and difficulties; however they didn’t realise then that their child would not let her disability stand in her way.

During her years in mainstream school in Middlesex, Naomi was severely bullied for her impairment yet she stuck to her dream which was to be an artist.  Naomi swam for the local disabled swimming team Naomi, but apart from this had very little interest in sport.  It was 2004 when Naomi was offered the chance to join Great Britain’s Adaptive Rowing Team, she seized this opportunity.  Finally, this was something she could do because of her visual limitation rather than being told she couldn’t because of it.

Over the next ten years Para-rowing developed into a full time Lottery Funded Paralympic Sport.  Naomi competed in the Mixed Coxed Four winning six World Championship Gold Medals, a Paralympic Bronze Medal in Beijing and at the London 2012 Games she became Paralympic Champion.   As a result of the success in London, Naomi and her crew were awarded MBE’s in February 2013.

Throughout her career Naomi has faced various challenges as all athletes do but her determination along with her ability to adapt and to see the positives in the world around her has kept her fighting.  Shortly after competing in her first World Championship in 2004, Naomi was involved in a horrific road traffic accident.  This left her with multiple fractures including skull fractures and broken ribs, she spent a week in an induced comas. Naomi’s recovery was based on her overwhelming desire to compete at the 2005 World Rowing Championships, which she did winning the Gold Medal.

Naomi’s story is truly inspiring, and she now works as a motivational speaker sharing her remarkable story with audiences up and down the country. She has worked with a wide range of high-profile brands delivering his inspiring stories from the track in corporate environments

The main sponsor Paul Waite, founder and chief executive of Aspen Waite, said: “Aspen Waite is delighted to be sponsoring the Thames Valley Business and Community Awards, an area with a diverse range of ambitious businesses we are passionate about supporting. We believe companies of all sizes deserve great advice – and those that strive to be the best should be recognised for their efforts. We look forward to seeing you on the evening.”

Are you feeling overwhelmed with your Marketing and Business Admin activities? Get in touch with us today to see how we can support your business!

This website uses cookies to improve your experience while you navigate through the website. Out of these, the cookies that are categorized as necessary are stored on your browser as they are essential for the working of basic functionalities of the website. We also use third-party cookies that help us analyze and understand how you use this website. These cookies will be stored in your browser only with your consent. You also have the option to opt-out of these cookies. But opting out of some of these cookies may affect your browsing experience.
Necessary Always Enabled
Necessary cookies are absolutely essential for the website to function properly. This category only includes cookies that ensures basic functionalities and security features of the website. These cookies do not store any personal information.
Non-necessary
Any cookies that may not be particularly necessary for the website to function and is used specifically to collect user personal data via analytics, ads, other embedded contents are termed as non-necessary cookies. It is mandatory to procure user consent prior to running these cookies on your website.
SAVE & ACCEPT